Chervil Restaurant is a little gem hidden within the clever architecture of Hotel Doolin. Looking out onto the manicured gardens of Hotel Doolin and our prized poly tunnel where we grow our own, herbs, veg & fruit with tender loving care. From the garden to your plate you can be guaranteed the freshest of produce is used in our dishes.

Our other ingredients are sourced from local artisan food producers including, Burren Smokehouse, St. Tola Goat’s Cheese, and Garrihy’s Seafood Doolin, to name but a few.

Chervil is the ideal spot for a romantic meal for two or indeed for any special occasion. We can cater for groups of all sizes and provide a great value Table d’hote menu in addition to our A la Carte.

Danny is a native of Galway but one who thankfully saw sense and married a Clare lady which means he is somewhat accepted this side of Galway Bay. Danny started his kitchen career in his teens working as a kitchen porter in busy kitchens and soon he was addicted to the buzz of the kitchen environment. Working his way up through the ranks he settled for many years in Bunratty Co. Clare where he worked in the Fitzpatrick’s Shannon Shamrock and the fine dining restaurant Mc Cluskey’s. From Bunratty Danny moved to Spain to open up his own restaurant and bar, which he ran successfully for ten years until his grá for wet and windy Ireland called him back. Returning to an Ireland in the throes of economic woe he opened a Creole restaurant in his native Galway until the lure of hotel kitchens saw him take the position of Executive Sous Chef in the Galway Bay Hotel. Danny is a keen fisherman, pig-farmer, a connoisseur of all things foraged and a BBQ fanatic. His style of cooking reflects his hobbies in that he loves to make the best of all that the local area has to offer and his menus are representative of the raft of independent, artisan suppliers that abound in North Clare, incorporating wherever he can wild, foraged and sustainable ingredients 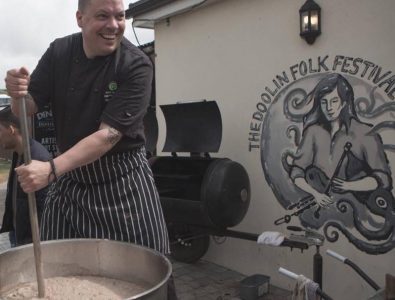 Here at Hotel Doolin we have a passion for delivering original wholesome and inventive food, wherever possible using local produce, organic and homemade, homegrown ingredients. We keep our own ducks and hens and grow as much of our herbs, salads, vegetables and fruit on site in our gardens and poly-tunnel. North Clare is a haven for foodies with a raft of independent, artisan producers. We are blessed to be surrounded by such an abundance of suppliers of quality produce and enjoy putting their produce on a plate and delivering it to you, our guest.
We are delighted to announce that Hotel Doolin has been recommended in the Georgina Campbell Guide, Great Places to Stay & Eat.
We are also featured in the McKenna Guide 100 Best Places to Stay 2015 & 2016.
Hotel Doolin belongs to Slow Food Clare and The Burren Foold Trail, winners of the European Destination of Excellence 2015 – Tourism & Local Gastronomy and Foodie Towns 2015